Romance is an essential part of manga, no matter what the genre. It is hard to pin point top ten romantic mangas because we have to choose from all the genre. Some have romance as their main plot whereas others have it as a side plot.

Mentioned below are manga with different genre, focusing on romance as a main plot. If you don’t like the order of the list or you don’t find the manga you wanted to see here listed then please comment down below. Your efforts can help someone find a manga of their liking.

The following are the Top 10 best Romantic manga:-

1. The Student Council President is a maid

Description : Misaki Ayuzawa is the first female student council president at a once-all-boys-turned-co-ed school. She rules the school with a strict discipline demeanor, but she has a secret: she works at a maid cafe due to her family’s circumstances. One day, the popular A-student and notorious heart-breaker Takumi Usui finds out her secret and makes a deal with her to keep it hush from the school in exchange for spending some time with him.

Description : Ryuu Yamada is known as a delinquent in his high school; he has been bored of classes after one year of attending school. One day, he accidentally falls from a flight of stairs onto Urara Shiraishi, the ace student of the school. Yamada wakes up to find that he has swapped bodies with her! The two try to reverse the change and discover that kissing triggers the body swap. On the suggestion of student council vice-president Toranosuke Miyamura, they revive the Supernatural Studies Club. The club encounters other “witches” with different powers that are activated with a kiss!

Description :When Teru’s older brother died, she was left with little higher than the usual cellphone featuring the text-tackle of an evasive character named DAISY, who Teru’s brother had informed that she would “support her when he was no longer able to.” DAISY became Teru’s pillar of power, during the the next couple of years as she faces her existence alone, as he sent her motivating words through his telephone number, whether inspiring or just chatter. One day, after bullies in the student council are strangely driven away, Teru inadvertently breaks a school window, which results in her employed by the grouchy, unkind school janitor named Tasuku Kurosaki. As Teru starts working for the college janitor that is unlikable, her emotions start to surpass that of master and servant and she starts to challenge the authentic identity of DAISY. So starts an improbable friendship between A – 16-year old high-school girl along with a sly but bright 24-year old guy.

Description : In times of need, if you look in the right place, you just may see a strange telephone number scrawled in red. If you call this number, you will hear a young man introduce himself as the Yato God. Yato is a minor deity and a self-proclaimed “Delivery God,” who dreams of having millions of worshippers. Without a single shrine dedicated to his name, however, his goals are far from being realized. He spends his days doing odd jobs for five yen apiece, until his weapon partner becomes fed up with her useless master and deserts him. Just as things seem to be looking grim for the god, his fortune changes when a middle school girl, Hiyori Iki, supposedly saves Yato from a car accident, taking the hit for him. Remarkably, she survives, but the event has caused her soul to become loose and hence able to leave her body. Hiyori demands that Yato return her to normal, but upon learning that he needs a new partner to do so, reluctantly agrees to help him find one. And with Hiyori’s help, Yato’s luck may finally be turning around. 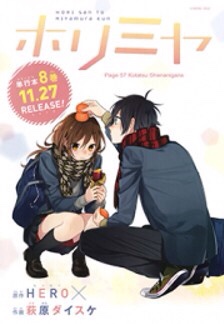 Description : Although admired at school for her amiability and academic prowess, high school student Kyouko Hori has been hiding another side of her. With her parents often away from home due to work, Hori has to look after her younger brother and do the housework, leaving no chance to socialize away from school. Meanwhile, Izumi Miyamura is seen as a brooding, glasses-wearing otaku. However, in reality, he is a gentle person inept at studying. Furthermore, he has nine piercings hidden behind his long hair and a tattoo along his back and left shoulder. By sheer chance, Hori and Miyamura cross paths outside of school—neither looking as the other expects. These seemingly polar opposites become friends, sharing with each other a side they have never shown to anyone else.

Description : A series depicting various scenarios of young love. These stories range from a boy, crippled by his absolute lack of confidence in himself, cannot even accept the fact that the girl of his dreams actually asked him out on a date, to the near-psychotic girl that pours her own blood into her homemade chocolate in order to win his heart. 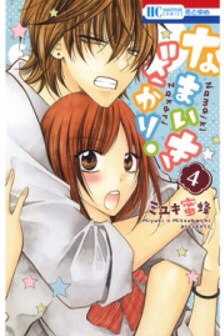 Description : From Mystic Iris: Upon first sight Machida Yuki knows that she doesn’t want anything to do with Naruse Shou, but how can she keep her cool when he is a part of the basketball club she manages?

Description : Mizutani Shizuku is the type of person who only cares for her own grades. But when she accidentally delivers lesson notes to Yoshida Haru, he becomes convinced they are friends. Haru turns out to have a very innocent personality, but who would’ve thought that Haru would actually confess to Shizuku? A cold-hearted girl and super-troublemaker romance with a fresh new perspective.

Description : A couple of high school pupils, Masaru Kato and Kei Kurono, are hit with a subway train in a effort to save the life span of a drunk homeless guy who’d fallen onto the tracks. Following their deaths, Kato and Kurono find themselves transported to the inside of an unfurnished Tokyo flat, where they meet with a Gantz expert Joichiro Nishi, as well as other clueless players. The pair soon understands that they’re prohibited to depart the flat. At one end of the room there’s a sizable black sphere called “Gantz”.

10. The Power of Saint is All Around

Description :Sei, a 20 year old office worker was summoned to a different world after finishing some overtime work. But the person who had summoned her looked at her face and said, “This is not the Saint.” Is this neglect play?. Sei left the royal palace and concealed her saint title. She started working at a laboratory where she made potions and cosmetics. She used her magic to grant people’s requests and slowly people began suspecting that she was a saint. Can Sei enjoy her slow dreamy different world life without her saint title being found out?

[Note: This list is made according to my tastes so if some one doesn’t agree with the numbering can comment down below so that i can make preferable changes.]

New posts in your inbox